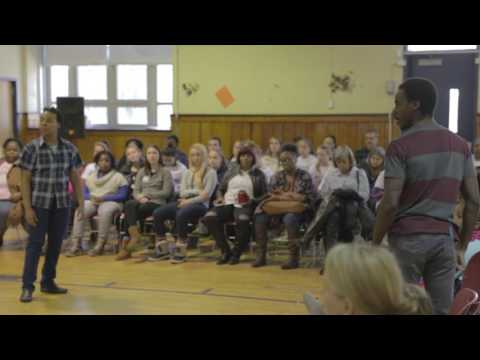 Back by popular demand! Voices of Voting returns from its successful runs last summer and during election season, just in time for Martin Luther King, Jr. Day. Targeted to middle and high school students but open to the general public, Voices of Voting is a short play commissioned by the Committee of Seventy and written and directed by award-winning Philadelphia artistic director David Bradley that ties the personal struggles and political courage of the 1960’s campaign to secure the vote to the present-day challenge of engaging young people in our electoral process. Three actors play more than a dozen characters in an event full of audience participation and laced with live music from the award-winning hip-hop/funk/jazz collective Ill Doots. Each performance is followed by a “talkback” session that challenges audience members to remember the courage of the young men and women of another generation who fought so hard to attain that fundamental right and renew their own commitment to citizenship. See the coverage from July's performances in Newsworks, PHL17 and the Times Herald, from November's performance at CBS and ABC, and January's MLK Day performance on CBS.

Join us on January 16th at 10:30 am at the Overbrook Educational Center (6722 Landsdowne Ave in Philly). Admission is FREE, but space is limited. Please RSVP to reserve your seat by emailing voicesofvoting@seventy.org.

The January performance is made possible through contributions from Comcast, PECO, and a donor who wishes to remain anonymous.